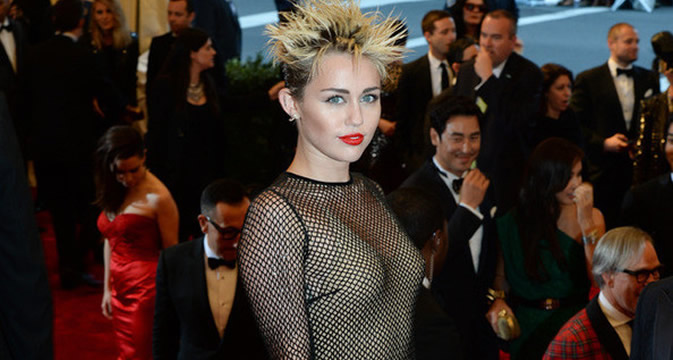 May 13th, 2013
For all of Twitter's benefits — immediacy, connection, information — it's also given jerks a direct line to be absolutely awful to people without fear of being punched in the face. (Anybody can be a tough guy when they're an anonymous tough guy.) The result is a license for hate speech, something Miley Cyrus is all too familiar with.

For some reason, certain pop culture fandom fiefdoms feel like the more they hate the competitors, the more it shows their love for celeb they've adopted as their own. Which is why Miley gets harassed by fans of her peers like Taylor Swift and Selena Gomez. “Everyday someone with a Swift or Gomez in there name wishes terrible things upon me (death is popular),” Cyrus tweeted Sunday evening.

Cyrus continued with a plea to her fans, "Please Smilers don’t ever think somehow you are supporting me by being hateful towards other artist. My fans make me proud by supporting my music & everything I do. Im sure these haters would make their idols much happier tweeting bout their music rather than wishing death upon their peers like psychos."

And just so everyone was clear where she stands with Swift and Gomez in the real world, Cyrus concluded, "We are all friends. Why can't you all be?"